Site of the Los Angeles Star 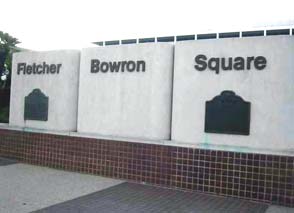 
Though we’re right by the , and a boatload of landmarks, it was not to be on this particular day, but from the Bella Union Hotel site, this one could not be missed since it’s on the same wall. And as it was with the Bella Union plaque, some important points are missed about LA’s first newspaper.

Firstly, it was called La Estrella de and printed half in Spanish and half in English until 1855. Another point was that the paper was ‘suspended temporarily’ was that due to outspoken criticism of the federal government during the civil war, the editor was arrested for treason and the paper banned from the mails. After getting it rolling again in 1868, they made it a daily in 1870, but lack of funds forced its permanent closure in 1879. “In 1852, the Star published a series of 22 articles written by Hugo Reid, a Scottish immigrant living in present day . These articles, which are the most comprehensive and thorough ethnographic portrait of the Native Americans of Los Angeles County, exposed their plight at the twilight of their existence.” – Michael Several 1997

With the exception on the LA Herald, the fate of the other dozen or so newspapers that existed before the LA Times began publication in 1881 was similar to the LA Star, and their runs were short.

You can kill a newspaper but it’s hard to stop the presses. During the Star’s four year hiatus for its confederate stance, the press was used by Phineas Banning to publish his Wilmington Journal, and after the LA Star closed for good, the press went on to duty in Orange County as the Anaheim Gazette. 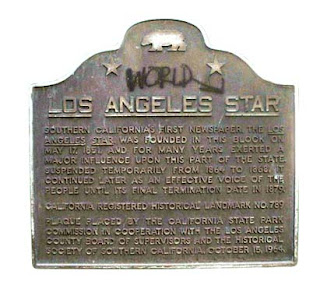