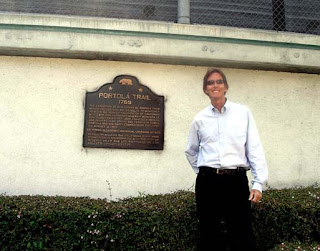 
From the downtown landmarks just visited it’s cruse down Olympic Blvd. to and  to one of the multiple sites marking Portola’s trail. The states directions aren’t that specific being that there’s a lot to take in on the 300 block of with obvious conclusion that the landmark is somewhere in La Cienega Park, a popular place for man and dog, making parking a privilege and not a right. After strolling the park and community center for awhile, the plaque is noticed across the street by the southern tip of the park on the wall of the Margaret Herrick Library, where one leaves the sidewalk, scales the grassy knoll, and steps on landscaping shrubs to read it. In a town where even the dog walkers across the street have publicists, you’d think the Beverly Hills Historical Society or some like organization would spot the plaque in the park where it could be seen by all these folks lounging about where Portola’s people did in 1769. 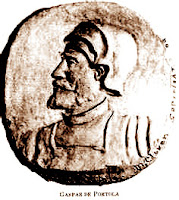 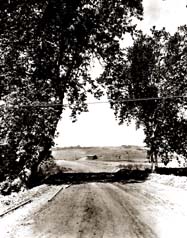 
Unlike everyone today running about in shorts and flip flops, Portola’s soldiers had to wear heavier garb. By 1769 they did however figure out that metal armor was as ‘off the A list’ as a 30 year old Paris Hilton and they wore unique leather vests that protected against life’s arrows, and were forerunners of those worn by Mexican and American cowboys. The leather vest/jacket was shaped like a coat without sleeves and made of six or seven plies of white tanned deerskin, and could stop arrows except at very close range. The shields were made of two plies of raw bull's hide and carried on the left arm to turn aside spears and arrows, with the rider being able to defend his horse as well as himself. In addition each wore a sort of a leather apron, which the Spanish called "armas" or "defensas," fastened to the pommel of the saddle and hanging down on both sides to protect the thighs and legs in thickets and woods. The truth of the matter was that rather than fending off Indian attacks at every turn they were primarily occupied with regrouping the stock and pack animals that often bolted away, but like bodyguards, they had to be ready for anything. 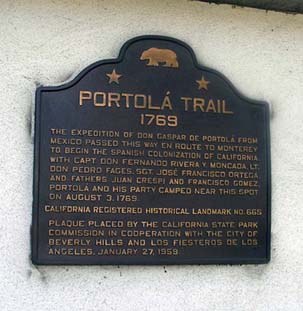