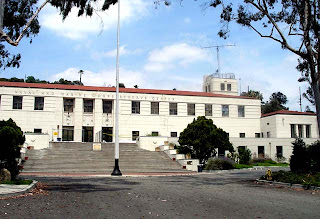 From the Jewish cemetery site it’s a simple matter of circling around to to the front of the structure and the plaque on the entrance staircase. The military abandoned the facility in the 1990’s and it has since been taken over as a training center for LA Fire.

Some time back this author was what they call a ‘grounds act’ at county fairs, which included the LA County Fair in . It was interesting to be a carney for a few weeks out of the year. This is brought up because for a time they used to give orientations to performers so that they knew more about the facility, had talking points, and point folks around the place. One of those points was that exhibit building 4 (built in 1930) was the largest free standing structure without walls around. Maybe that was the case in 1930 but this next landmark claims the same thing. Then there are the blimp hangers at the El Toro air station, which at over 1000 feet long and 300 feet wide were the world’s largest free span structures (1942)….and apparently still are, for those made out of wood. Who knows? One thing for sure, we weren’t afraid of doing big things. 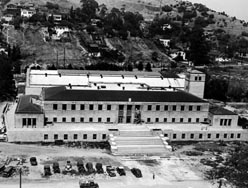 Seeing this place brought back personal memories of a post time in the Marine reserves and being called in to explain associations with ‘known radicals’ on a college campus. Partially shaded by the round hood of the flex desk lamp light, the Commander sat at the grey metal desk in the corner of the large, otherwise empty room with its grey walls and grey floor. From a manila envelope, 8 by 10 glossies verifying the alleged association were presented and thoughts of the obvious film noir implications aside, the recollection was that we were setting up for a little outdoor midday concert by Phil Ochs. So, it was surmised by yours truly that it was most likely the famed protest singer that some intelligence agency was following, and combined with the associate’s faint ties with the SDS, conspiracy theories were developed. The Commander was comforted, and a document was signed stating that being recalled to active duty would not place yours truly under greater hardship than someone else in the same circumstances…..Catch 22. Ironically, our little event was poorly timed and promoted and though Mr. Ochs played a good set from the tiny riser, hardly anyone stopped to listen. 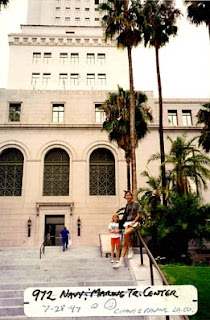 Plaque inscription: NO. 972 NAVY AND - Designed as the largest enclosed structure without walls in the world by noted architects Robert Clements and Associates, this Art Deco building, constructed between 1938 and 1941 by the WPA, is the largest and second-oldest in the United Stages. It has served as the induction, separation, and training center for more than 100,000 sailors since World War II well as the filming site for countless motion pictures and television shows.
Location:
USGS Quadrangle Sheet Name:
GPS: 34.069032,-118.243060
Posted by John Malcolm Penn at 7:18 AM