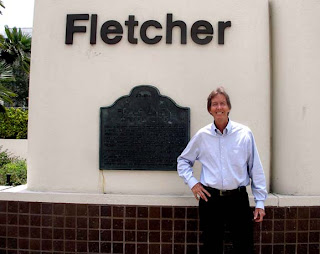 In what often turns out to be the case, the mark is missed for this landmark. It is depicted as an important gathering center and that the Butterfield Stage used it as a stop on route to . Yet it isn’t mentioned that its history goes back to 1835, or that was the last Capitol building of , or that it was LA County’s first courthouse in 1850, or that it spent the majority of its 105 years as the Saint Charles Hotel. 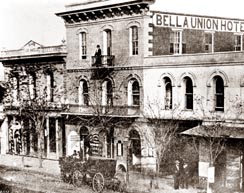 The structure began as the home of Isaac Williams in 1835, grew a second story in 1851 and a third in 1867. In 1873 it was remodeled and they were calling it the Clarendon, and a few years later became the . In its last few decades the hotel had degenerated to flop house status and in 1940 the historic building was demolished for a parking lot.

Not to keep nagging about the text for this landmark but it wasn’t used by Butterfield all that long. They rented office space for awhile but moved to their own facility on Second & Spring, where the is now. Wells Fargo and Phineas Banning also used the hotel for their stage outfits.

Being the last Capitol building and the first courthouse far outweigh in importance the passing association with the Butterfield Stage Line and the Office of Historic Preservation ought to rethink this one. That said, their mention of Waterman Ormsby’s account and book ‘The Butterfield Overland Mail’ is available and a good read, even if it has little to do with this landmark 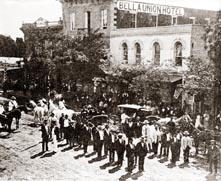 Plaque inscription: NO. 656 BELLA UNION HOTEL SITE - Near this spot stood the Bella Union Hotel, long a social and political center. Here, on October 7, 1858, the first Butterfield Overland Mail stage from the east arrived 21 days after leaving . Warren Hall was the driver, and Waterman Ormsby, a reporter, the only through passenger.
Location: , 300 block of N Main, between and Aliso Sts,
GPS: 34.054668,-118.240925
Posted by John Malcolm Penn at 7:28 AM