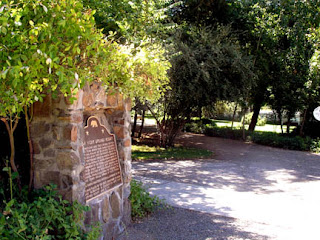 From Son House it’s on to the warm and grassy outskirts of Ukiah and the Vichy Springs Resort, named so after the spa town in central France for its similarity in mineral springs, and not because they sympathized with Nazis. Actually, the Nazis used as a capitol for its location, good roads, rail, an advanced phone system, and plenty of rooms. But let’s get out of Yurrup and back to . 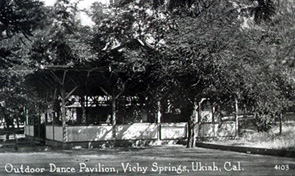 Pomo Indians had been using the springs for thousands of years by the time William Day came along and set up a small resort as the gold rush began. Apparently, Mr. Day didn’t own the property and its operation went to William Doolan in 1865, who built it into a resort that could handle up to 200 guests. 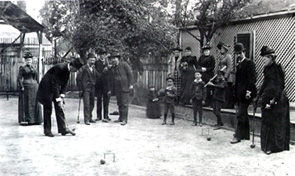 “Though never closed completely since 1854, the reopening of overnight rooms in 1989 created once again the only destination resort in Ukiah since Vichy Springs was last fully open in 1941. Over 45,000 visitors used Vichy Springs in 2003, up from 100 in 1988. The naturally warm and carbonated “Vichy Baths” are once again being used by Californians and guests from all over the world to relieve the stresses and strains of urban and city life. Guests enjoy hiking to , walking the pathways through oak and madrone woodlands, picnicking, and sharing romantic interludes as they have for 150 years at Vichy Springs.” – Vichy Springs Resort. 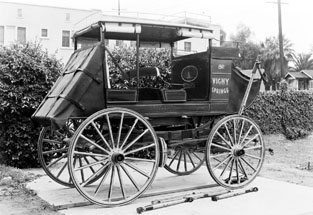 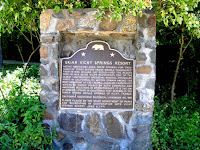 Plaque inscription: NO. 980 (S) UKIAH VICHY SPRINGS RESORT - Frank Marble discovered these springs in 1848, and William Day established a resort here in the 1850s. Ukiah Vichy represents one of the oldest and one of the few continuously operating mineral springs in . Its waters remain among the most important of the thermal, alkaline-carbonated waters once so highly valued by both European and American believers in hydropathy. It is the only mineral springs in that resembles the famed Grand Grille Springs of .
Location: go to …actual resort
39.166969,-123.159227
Posted by John Malcolm Penn at 6:40 AM