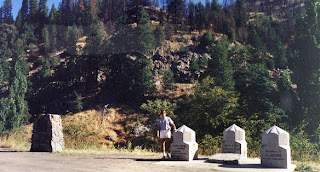 Uphill and eastward in the Caddy on Highway 50 to the next Pony Express marker from Sportsman’s Hall, we come to the wide turnout that was ’s remount station. Right next to the state marker are three stone sculptures that look like a cross between baby ’s and tombstones. It turns out they are the three remaining  obelisks that stood on the four corners of the stone arch bridge that spanned the here from 1900 to 1930. Caltrans put them here in 1990, just in time for this 1993 visit.

We're up to 3200 feet in altitude and from here and climbing upwar, Pony Express rider Warren Upson would have encountered Broocless Bridge and galloped over the planks and rushing water in weather that was turning into a heavy snow that frist day of April 4th, 1860

The bottom was covered with trees of deciduous foliage, and overgrown with vines and rushes. On a bench of a hill nearby, was a field of fresh green grass, six inches long in some of the tufts which I had the curiosity to measure. The animals were driven here; and I spent part of the afternoon in sitting on a large rock among them, enjoying the pauseless rapidity with which they luxuriated in the unaccustomed food.

The forest was imposing to-day in the magnificence of the trees; some of the pines, bearing large cones, were ten feet in diameter; and we measured one 28 1/2 feet in circumference four feet from the ground. This noble tree seemed here to be in its proper soil and climate. We found it on both sides of the Sierra, but more abundant on the west.

Frémont: February 26th. We continued to follow the stream, the mountains on either hand increasing in height as we descended, shutting up the river narrowly in precipices along which we had great difficulty to get the horses.


The California State Park Commission, along with E.Clampus Vitus Chapter 49 put the state marker up in 1960. ’s Station was part of a toll road operated by John M. Moore snd was briefly a post office.

Plaque inscription: NO. 705 MOORE'S (RIVERTON)-OVERLAND PONY EXPRESS ROUTE IN CALIFORNIA - This was the site of a change station of the Pioneer Stage Company in the 1850s and 1860s. During 1860-1861, the Central Overland Pony Express maintained the first pony remount station east of Sportsman's Hall here.