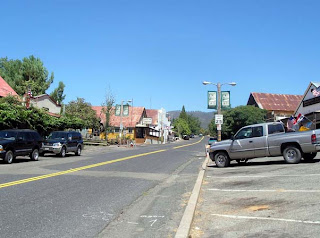 From the Hornitos (landmark #333) we backtrack and go up Highway 49 which they’re calling around these parts the ‘’  fifty two miles to the gold rush town and commerce center of Coulterville. You can easily walk the old town area, and check out the Chinese store (Sun Wo Col), tour the Hotel Jeffery, and cap things off with a sarsaparilla at the Magnolia; where patrons have been passing through those swinging doors since 1851. 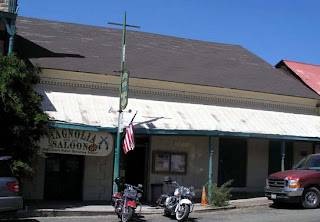 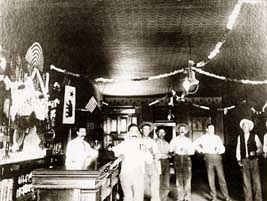 
You don’t really notice it at first, but they’ve buried the utilities here and that helps preserve the look of the many old structures still standing. Like clockwork, the town burned down three times, always in July and always twenty years apart; in 1859, 1879, and 1899.

It was after the 1899 fire that the ‘Gold Rush of 1899’ came. The story was that one of the residents had hidden his gold coins in the walls of one of the structures that burned and after that rubble was used for potholes in the streets, winter rains began uncovering the coins. The rush was on and the streets were soon impassible. 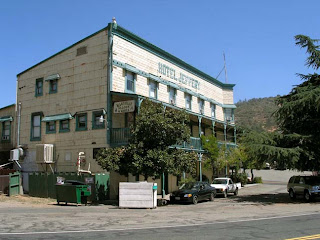 Coulterville had a lot going for it, not the least of which was its crossroads location and proximity to other towns, mines, and camps, making it a natural center for commerce. That’s what brought George Coulter and family here in the first place. Also, after placer mining faded out Coulterville got a second boost by the fact it sat on huge deposits of gold baring quartz, and that hard rock mining yielded gold for years to come. 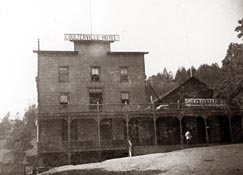 Coulter built a hotel to accommodate the new traffic and came up with an ingenious water system for it consisting of a pump driven by a flywheel that was forty feet around and had a two foot rim. He then trained he two black Newfoundland dogs operate it by running inside the wheel, and when the water tank became full, the wheel stopped automatically and the dogs were free to resume duties and waiters and bellhops. Note to patrons: ‘Go easy on the bathwater;.

This is the last dispatch for as we’ve already covered early on and all that remains is Savage Trading Post, which will hopefully be visited sometime down the line as part of a sweep of gold country’s landmarks that have been passed by on previous trips. So long, butterfly. 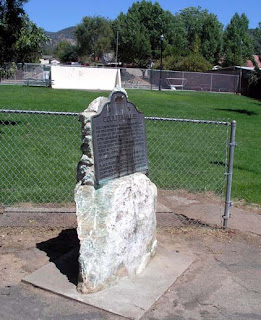 Plaque inscription: NO. 332 COULTERVILLE (S)- George W. Coulter started a tent store here in early 1850 to supply the hundreds of miners working the rich placers of Maxwell, Boneyard, and Black Creeks. He also built the first hotel, water for it was pumped from a well by two dogs. Originally called Banderita from the flag flying over Coulter's store, the settlement became when the post office was established in 1853, but the name was changed the following year to honor Coulter. The family of Francisco Bruschi, who erected the first permanent building here, provided the town's leading merchants for over eighty years. Despite their crude methods, and with only wood for fuel, the nearby quartz mines operated for years and produced millions of dollars worth of gold, Andrew Goss built the first stamp mill for crushing their ore.
Location: 5004 Main St. Coulterville, 95311 County Park, NE corner of intersection of County Hwy J20 and State Hwy 132 (P.M. 44.8), Coulterville N 37° 42.684 W 120° 11.853 Marker is at the intersection of State 49 and Main Street, on the right when traveling south on 49.
GPS: 37.710307,-120.197017
Posted by John Malcolm Penn at 7:30 AM