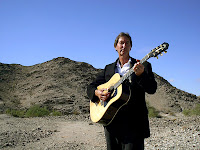 From the interstate we roll about eight miles up S34 to a dirt road and a decision, mine or marker? The Tumco Mine site is on the right against the hills and the marker is three miles the other way, let’s do both. Like most graded dirt roads, this one has a tendency to washboard and mimic the experience of traveling the old plank road, the site of which we just came. There’s usually a groove with a little less vibration or you can simply speed up to 50 or so and hydroplane over everything with little contact of control and slow up for turns. The latter isn’t a good idea here for this is dusty personified and stopping brings that wall of floating dirt right back on top of you. Washboard surfaces are no issue for our 1951 Cadillac Series 62 , for the suspension has no knowledge of such minor road irregularities and the buzz is neither heard nor felt at any speed. Old news for this Caddy too as its original owner was a doctor in and this is just another house call. 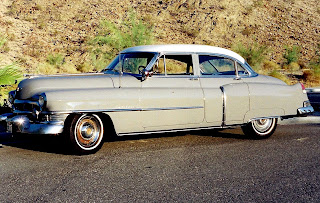 The landmark plaque sits at the entrance to Gold Rock Ranch, and for folks who want to get away, have done so and still yearn to get farther away, Gold Rock Ranch is for you. Rates are beyond reasonable. 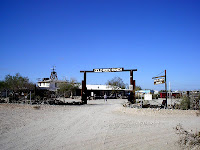 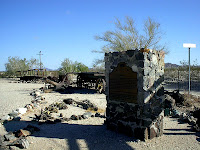 From the Landmarks of Imperial County album booklet:
As you drive by the Imperial sand dunes on I-8 to the North you'll see the brown , named so for two boys that legend says brought gold nuggets to the Spanish 300 years ago. More recent gold discovery is attributed to a mule that strayed from a bound wagon train in 1862 and his finder found a nugget at the site. Tumco is an acronym for 'The Union Mine Company', a consolidation of several later claims in the area, the main one being at the site of the town of . These were company towns and the miners worked and played hard and came away with little. One ledger account from 1897 shows a miner with a net income of $8 for working 30 days in August. 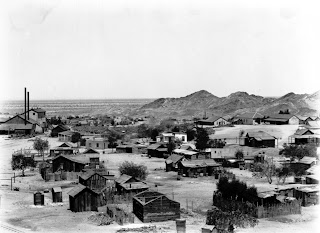 Plaque Inscription: State Historical Landmark No. 182
Pete Walters of Ogilby discovered the first gold vein at Gold Rock on January 6, 1884. From his Little Mary Claim began a gold camp which reached its peak development between 1893 and 1899 as Hedges, with 3,200 residents. Nearly closed, 1900-10, it was reopened as Tumco, 1910-13, and worked intermittently until 1941. Tumco has long been a ghost town.
Location:  On Gold Rack Ranch Rd, 1.0 miles East of County Hwy S34, 9.0 miles North of I-8, 4.5 miles NE of Ogilby.  In addition to state information the plaque is 2 miles West of S34 on 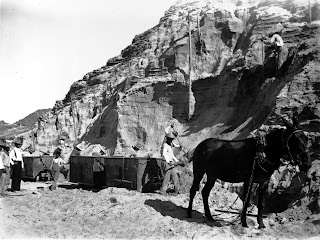 Here’s a link to a full video of the song:
http://www.youtube.com/watch?v=fXAJS0uQ9p0
TUMCO MINE  (a personal favorite)
Howdy do and welcome to you
This is the Tumco mine
Here's your mining hat here's where everything's at
You're gonna have a real fine time
Known as the town of
You'll be makin' three dollars a day
It's a company town and rules abound
It's a dollar a night to stay
Chorus- Tumco mine the only mine discovered by a mule
Strayed from westbound wagon train in 1862
Put on your hat, get in the shaft, bring in the gold so fine
Dig around in ground and bring up the ore, workin' at the Tumco mine
It's a dollar a day to be on the land
A shack will cost you more
Three dollars a day is a pretty good wage
This town is gonna cost you four
We'll be paying you in script and tokens
Instead of giving you cash
You'll be working the mine, or with cyanide
Or the stamp mill, don't ask.
There's a store here for provisions
And place called the Miner's Club
Where there's liquor and pool and a fight or two
And the cook can make you grub
There's a hospital in the middle of town
Whitewashed and forty foot square
It's easy to see and I guarantee
Heat stroke will send you there
Posted by John Malcolm Penn at 7:13 AM