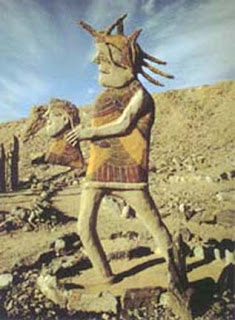 ﻿
It would be best to drive by this one and stay on the road but for those with a sense of adventure and enjoy the likely interaction with folks camping in the tress and brush, you can head north off at the Sleepy Hollow RV park. The sculptures have been destroyed and only the rubble from them remains. If you find yourself mugged and your car hijacked, it’s an easy hop across the border to Algodones just a mile away on one of the many senior’s tour buses for medical and dental treatment and prescription drugs. 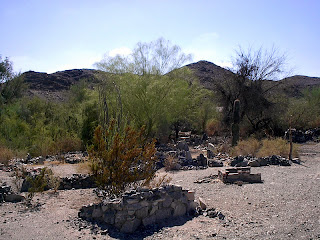 A prudent alternative for those in need of a landmark fix right here is Hanlon Heading right on . 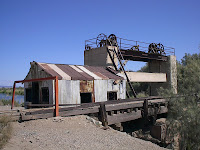 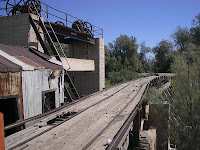 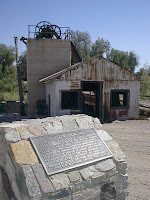 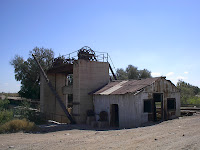 From the Landmarks of Imperial County album:
In 1947 the doctors said that Charles Kasling had only a short time to live unless he moved to a hot, dry climate. First he moved to the Death Valley area, and in 1960 he left for , where Driftwood Charley's World of Lost Art was created."
Text and image are copyright "Fantastic Architecture: Personal and Eccentric Visions" by Michael Schuyt, Joost Elffers, and George R. Collins, 1980, Dumont Buchverlag, , ISBN 0-8109-0914-6; out of print.
Social Security records indicate Charles Kasling was born July 10, 1901 and passed away in March of 1985, a testament to desert living. 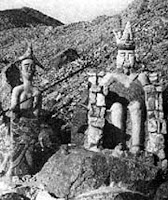 ﻿
There is no marker or plaque, but if there was it would read: State Historical Landmark No. 939
Twentieth Century Folk Art Environments (Thematic)-CHARLEY'S WORLD OF LOST ART
Charles Kasling began sculpturing near Andrade in 1967, and his creations now fill a site of approximately two and a half acres. His style, best described as eclectic, was inspired partly by his world travels with the U.S. Navy and partly by the desert terrain.
Location:  On dirt road, 0.5 miles NW of Andrade, 7 miles SW of Winterhaven.  As the second photo shows, the site has been decimated and travel there is not recommended.
Google maps: 32.730902,-114.726877
Charley’s Lost Art is 19 miles from Tumco Mine
Here’s a link to a video sample of the song:
http://www.youtube.com/watch?v=lYr-DWedYW4
DRIFTWOOD CHARLEY
Back in 1947 the doctor told Charles Kasling
You've only got six months to live
Charley said, "I wasn't asking".
Navy life has made its toll down in the engine room
Your lungs they just don't work so well
I hate to break the news
You know there just might be a way
Dry heat it can prolong 'ya
If you will be inclined to move down by
So Charley grabbed his old sea bag
Shook hands and said, "here's to ya
I know what I'm a-gonna do, I'm headed down towards ”
Chorus -
In the there's so much to be seen
Sculptures carved out from the stone of places he has been
There are figures from the bible, creatures old and gnarly
At this place we've come to know, the
"I'm gonna tell a story, tell it out of stone
Whatever comes into my mind
And go it all alone
From life here in the desert, from my years in the Navy
I'm a carving sculpting desert fool
Some folks think that I'm crazy".
Charley fooled that doc you see, lived another 40 years
Two acres of inspiration
You'll find it all right here
Posted by John Malcolm Penn at 8:09 AM